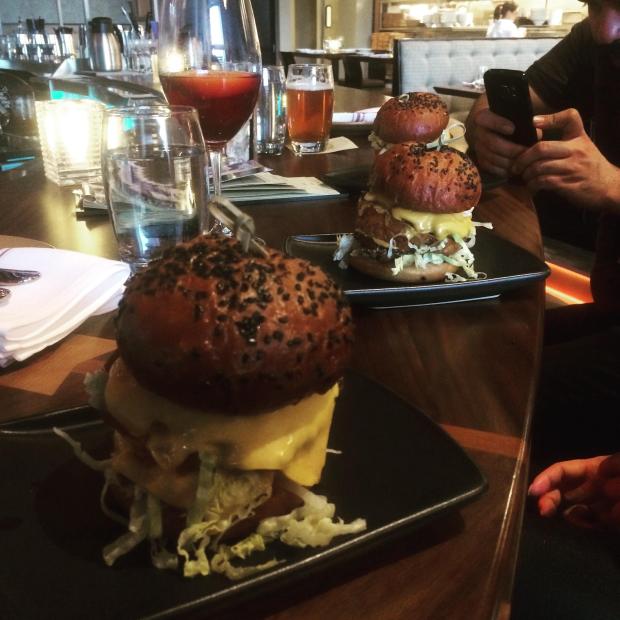 Photo by Kyle Coughlin, but that’s me with my phone back there!

Minnesotans reach a point every winter where we must ask ourselves, “why do we live here?” This past Sunday, it was 26 below zero including windchill, and as Netflix beckoned us to our couches, we with our lofty goals ventured into the near-tundra to the heart of Uptown to get the cheeseburger at our town’s latest modern Italian crudo and noodle spot, Scena Tavern.

Paul Dzunbar may be the Twin Cities’ biggest restaurant mogul. Besides his role as CEO of locally-based and originated Green Mill chain, Dzunbar owns the various Crooked Pints, the Town Hall group, and a handful of other standalone spots, while currently developing a few more places around town. Dude’s busy. But, while he seems to have mastered the lucrative pub game, Scena is his go-big-or-go-back-to-pubs attempt at more upscale fare, and he’s recruited an all-star team to help launch.

Behind the drink list (and frequently the bar) is the team from Bittercube, the Milwaukee-based masters of all things cocktail who consult internationally developing bar programs, though they’re probably best known for their delicious hand-crafted line of bitters. Wine guru Bill Summerville, former general manager and master sommelier at both La Belle Vie and Spoon and Stable, assembled the wine list. And consulting on the menu are unmatched local chef duo Erik Anderson and Jamie Malone.

The chefs’ collective resumé is a local where’s-where of top notch restaurants. La Belle Vie, Porter & Frye, Sea Change, Auriga; this pair’s been kicking culinary ass for years. Anderson left town a few years ago to run the Catbird Seat in Nashville, and earned him and partner Josh Habiger Food & Wine’s Best New Chef Award in 2012. Malone would win the following year helming Sea Change. Anderson returned to Minneapolis two years ago to partner up with Malone to open the upcoming Brut in the North Loop, and in the meantime have been hosting pop-ups, traveling, and helping Executive Chef Marc Paavola develop the menu at Scena.

On top of it all, Anderson’s a fellow cheeseburger fanatic, and I had to see what a chef of his caliber would do with a patty and a bun.

At 3pm on a Sunday, Scena was vacant, having completed brunch service and gearing up for dinner. But it was also happy hour, the only time the cheeseburger appears on the menu outside of weekend brunch, but my sources tell me it’s always available to order. As a big fan of drinks Bittercube did at Eat Street Social, I was excited to sample their latest concoctions and ordered a non-happy-hour Scena Sling, an aquavit-lemon-sweet vermouth cocktail because I adore aquavit, but not surprisingly found it more citrus and sweet than I prefer in a cocktail, though the aquavit had a great presence and the drink was overall complementary to itself. It was good, but not my bag.

I don’t need to say I ordered the burger anymore, do I? This is Burger Fetish. But am I skipping an important plot point if I omit it from now on? Like, “how did Matty get this burger? Did it appear as if out of nowhere? Did they see him coming and start making his burger upon arrival? I don’t understand!” We’re all here for the same reason. Let’s agree that I ordered the burger and move on. 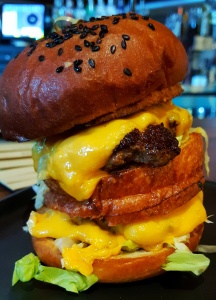 The cheeseburger came out and on appearance immediately gave away its inspiration: the Big Mac. All together now: two all-beef patties, special sauce, lettuce, cheese, pickles, onions, on a sesame seed bun. Props on the iceberg lettuce. It holds up well to the heat of the patty and gives a great crunch. The onions were raw and diced perfectly. They use a note-perfect replica of McD’s Special Sauce, and I greatly appreciated just how much was on this monster: a swipe on all four cut surfaces of bun. My biggest gripe about the fairly standard use of most “special sauce” is that you can barely taste it. Here, you couldn’t miss it, but it definitely did not overwhelm. The beef was a definite dominant flavor with the gobs of cheese singing harmonies right on the patty’s heels. The glorious sear screams smashed patty, but unfortunately so did the overdoneness. It was too tough, and lacked moisture. I can’t help but think this was an intentional side-effect of the smash technique, but smashing to get that sear doesn’t necessarily mean losing moisture if properly executed.

The beef’s well-seasoned and the flavor is definitely good, but there was too much chew. I admire the effort of a house-made bun, but always find myself disappointed. No restaurant can make a squishy enough bun, and if you’re trying to recreate a classic, you need a squishy bun, and this was simply too much bread. Three quarters of the way through, the bread should be reduced to a near-tortilla, but it remained intact and bready as fuck. Flavor-wise, the burger’s an on-point facsimile, but texturally, it misses the mark. Between the overwhelming bun and the too-tough patty, I’m not a fan of this burger.

This is, of course, an Italian-inspired modern place with an emphasis on crudo and steak and pasta, and the rest of the menu that I completely ignored sounds real tasty.

The crew agreed the obvious next stop was to the McDonald’s across the street for Big Macs, and that’s where we went. But I did not end up getting a Big Mac.

TO BE CONTINUED, sort of. This entry’s about the Scena cheeseburger, and the next one’s about McDonald’s, and they stand on their own, but they’re connected, but only kind of. I’m probably overthinking this.