2015 marks the “death of fine dining” in the Twin Cities, following the closing of two of its classic gems, La Belle Vie and Vincent. Culinary excellence has surpassed the elegance of white tablecloths and jacket-required dress codes. Our high-end dining options are just more accessible. I’m obviously a burger dude, but I love a fancy-schmancy meal, and when La Belle Vie closed, I got sad even though I’d never been there, but rather because now I never would. So when Vincent announced its imminent closure at the end of the year, I vowed to put its legendary burger on Burger Fetish in memoriam.

But first I had to eat one, so I got the crew together, and freaked them out when I told them where we were going. We eyed the dining room through the windows wondering how much we’d stand out, then walked in and got a booth in the still-classy-but-not-so-stuffy bar area. It was their late night happy hour and we ordered a few extremely reasonably priced drinks, shared an order of poutine, and got a round of Vincent Burgers.

Chef Vincent Francoual moved to Minnesota from New York–where he spent time at four-star fine dining French restaurants Le Bernadin and Lespinasse–in 1997, but hails originally from France where he began his culinary career at age 15. In 2001 he opened Vincent A Restaurant on Nicollet Mall in Downtown Minneapolis, which was well-received off the bat. But in 2009 he introduced a burger that paid homage to both Daniel Boulud’s uber-decadent db Burger and Minneapolis’ own Juicy Lucy. 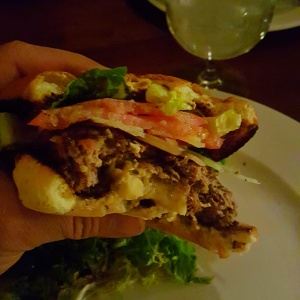 At first glance, you’ve got a fairly standard California-style: lettuce, tomato, and raw onion with a special sauce that a finger-swipe confirms is actually a pretty standard special sauce: ketchup, mayo, pickles. The burger is grilled–with a very elegant quarter-turn crosshatched grill marks–which as we all know dries out the meat a bit but delivers a really excellent flame-licked taste, served on an eggy squishy also-grilled bun. But the star of the show is hidden from view. It’s stuffed with smoked gouda and braised short ribs, and it’s delicious. The short ribs are barely-holding-together tender and full of amazing flavor, and the gouda is just delightful and rich and goes toe-to-toe with the short rib. The California toppings and special sauce give it an air of familiarity, but the stuffing really drives the point home that you’re eating something special.

Following Vincent’s closure, chef Francoual will be moving on to a position as Cara Irish Pubs‘ Culinary Director. Luckily for us, they’re bringing the Vincent Burger to all of the locations, but before it becomes an Irish pub staple, I’m just gonna insist you get one at its original home while you still can. You’ve got two weeks from my publication date until Vincent closes, folks. Go on happy hour when the burger’s only $8. Go bid farewell to Twin Cities fine dining by eating the lowest-brow thing on the menu. But go and fucking love it for being damn tasty.

No post next week because I’m heading to New York City! I’m joining my family to celebrate Christmas, and I’m using it as an excuse to take a week off of work to eat as much as I can, but it somehow feels like it still won’t be enough. It would behoove you to follow me on the Facebook, Instagram, Twitter, and Tumblr because I’ll be eating an unhealthy amount of burgers at as many damn places as I can, chronicling my travels on the various social medias. Of course, I’ll be giving a full round-up right here on the Burger Fetish main event, but that’ll be the next entry in about two weeks. ‘Til then, you can all drool over pictures from the road.

One thought on “The Vincent Burger at Vincent: “Adieu, Adieu to you and you and you””